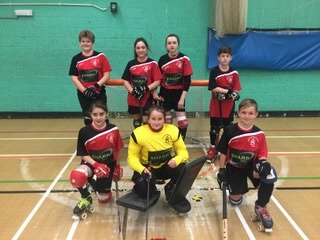 Kings Lynn’s fifth ECRHA under 13s tournament of the season was at Burwell Sports Centre. The team were against King’s Lynn B, Skaters and Soham.

First game was against King’s Lynn B. King’s Lynn A were determined to start the tournament in winning ways. Within one minute Alfie Poppy put King’s Lynn A 1 – 0 up. King’s Lynn B putting up a strong defence making it difficult for the A team to get one in the back of the net. Four minutes left of the first half and the A team picked up the pace and Ria Griffin scored.

Second half, King’s Lynn A started strongly, making bold moves but struggling to find the net. The B team really going for a goal, but the A team stuck back. Two minutes left and King’s Lynn A were 4 – 0 up, aided by an own goal

The second game was against Skaters. With King’s Lynn still excited from the first game, they put Skaters under a lot of pressure. With Alfie Poppy scoring the first goal and fifteen seconds later Ria Griffin made it 2 – 0. With some strong teamwork, the score was 5 – 0 with five minutes left of the first half. With King’s Lynn dominating the first half Will Dickerson added another goal to the net and so did Billy Davey with one second remaining.

Second half saw much of the same but with Ria Griffin now scoring in just one minute. Alfie Poppy storming through the rink and scoring once again. With all this confidence Millie Watson and Billy Davey found the net themselves, making the score 15 – 0. But with one minute remaining King’s Lynn’s defence was showing weakness, Skaters scoring a goal.

Third game was against Soham. King’s Lynn knowing that this was going to be a tough game. With Soham putting out a strong defence King’s Lynn was playing an attacking game. Soham piled on pressure but Lynn came back just as strong with Alfie Poppy scoring with three minutes left. Soham wasn’t backing down still trying their hardest and it paid off by scoring and finding the back of Kings Lynn’s goal.

Second half was even more attacking. Lynn’s defence was getting weaker and Soham scoring in one minute. Some amazing saves by King’s Lynn’s goalkeeper, Imogen Senter. Soham scored with another minute making it 4-1. King’s Lynn gained confidence with Ria Griffin scoring twice with four minutes left. King’s Lynn continued to play a good defence.

The team would like to thank Josh Taylor for giving up his time to coach the team all season.

Thanks goes to Sharp Laser for their generous sponsorship of the team.