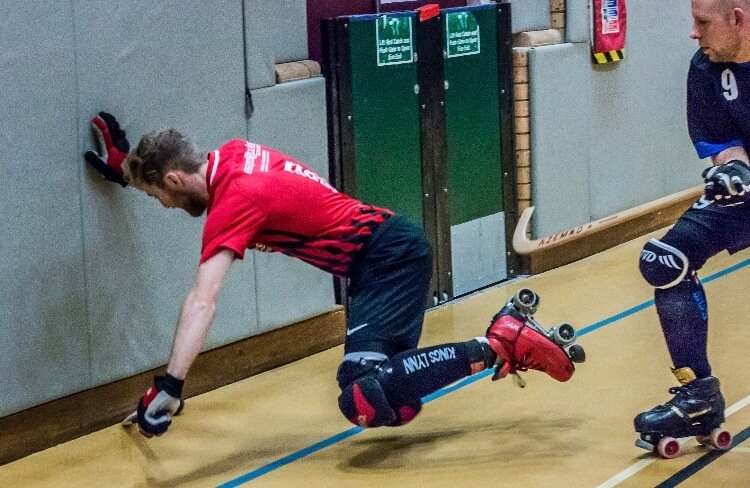 King’s Lynn RHC returned to winning ways with a 9 – 1 victory at against Ely and Chesterton United. After a disappointing defeat to title rivals London last weekend, it was imperative that Lynn responded and they did just that on Saturday, scoring nine goals in front of a customarily buoyant home support.

Lynn started slowly and Tom Allander in Lynn’s net made a number of assured saves before they found their rhythm. After fifteen minutes of relatively uneventful hockey, Owen Norris opened the scoring for Lynn, latching on to a lofted through pass from Jamie Griffin to volley past ECU’s keeper.

With the tempo building, Norris scored his second goal of the game, a fierce slapshot, minutes after captain Josh Taylor opened his account for the evening by finishing high into the roof of the net from a Matthew Baker assist.

With forty-two seconds of the first half remaining, Jack Tucker cut in from the flank and flicked a precise effort into the far corner to take Lynn into half time four goals up.

Tucker got his second of the game four minutes into the second half, a beautiful lift dribble served up on a platter after Baker’s mid-rink turn found Tucker unmarked. Tucker’s goal was sandwiched between Taylor’s second and third, one an angled slapshot arrowed into the top corner and another placed neatly underneath the onrushing keeper.

Midway through the second half, Lynn went down to three men following Harvey Dugdale’s blue card for a trip on the halfway line. Josh Roberts, making his first appearance of the season as he replaced Allander in the second half, saved well from the resulting direct free hit, in addition to tidying up some peripheral efforts that came his way.

With Lynn down to three, ECU couldn’t capitalise on their one-man advantage and the numbers were soon level as they too received a blue card to make the game three versus three. Baker could have increased the lead from the direct, but his flicked effort, having beaten the keeper, sailed high over the bar.

With both suspensions served and numbers restored, Lynn conceded a penalty to give ECU their consolation, an accurate slap from their captain after Josh Horn had mistimed his tackle in the area.

With seven minutes remaining, Taylor scored his fourth and final goal of the game, taking his tally to twelve goals from five this season.

As the clock approached zero, and with the final shot of the game, Taylor launched the ball from inside his own half toward a gleeful Griffin who deflected the shot in for his first of the match and Lynn’s ninth.

The award for Captain Vancouver Man of the Match was collected by Jack Tucker after the final whistle, who was photographed by Jo Tidman of Rock Click photography shaking hands with matchday sponsor Andy Horn of A H Windows.

Lynn’s next game is away to Manchester on 7th December. The game will be livestreamed from Manchester RHC’s Facebook page from 18.30. Tune in to see Lynn continue the race toward their fifth consecutive title!