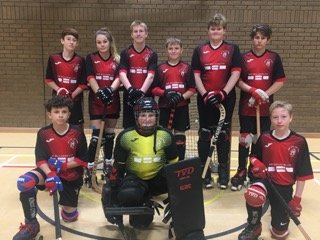 The third tournament of the season was held at North Herts Leisure Centre.

King’s Lynn v CCRHC
In their first game, KLRHC faced CCRHC A, which proved somewhat difficult match. Minutes into the game and CCRHC A had made several attempts to score. Imogen Senter displayed some outstanding goalkeeping, making many superb saves. Unfortunately, CCRHC A managed to score within the third minute. Shortly after, Harvey Byler and Alfie Poppy both took shots at CCRHC A’s goal, however they were both unlucky and didn’t manage to score. Thomas Barker and William Dickerson held strong in defence, while Imogen Senter continued to save countless shots. CCRHC A proved to be the stronger side, claiming a further five goals in the first half.

The second half showed to be equally tough. This was highlighted seconds into the game with CCRHC A taking a shot at the goal. Imogen Senter made a cracking save. Shortly after, CCRHC managed to score. KLRHC fought hard. Myah Easter showed great strength. Great teamwork was presented by Alfie Poppy, Thomas Barker, Myah Easter and Harvey Blyler. With Imogen Senter persistence, allowed her to save many more goals. Taylor McAree, Billy Davey and Mikey Whiting battled hard to win control, against the ball. Myah Easter and William Dickerson both attempted to score, before CCRHC A claimed the final goal minutes before the whistle.

The second half continued as the KLRHC side lead the way and Harvey Blyler scoring from some great passing by Billy Davey, Taylor McAree and Myah Easter. Billy Davey almost scored another soon after. CCRHC B then scored an own goal to help increase KLRHC’s lead. Imogen Senter continued to display excellence in goal, throughout the game. Finally, Alfie Poppy scored again in the final minute.

In the second half Imogen Senter displayed excellent strength in goal yet again, making tremendous saves against Letchworth. Myah Easter and Harvey Blyler worked well together, composing some excellent passes. Harvey Blyler tried to score, however was very unlucky. Unfortunately, Letchworth proved the stronger side in ability and speed allowing them to claim five further goals.

The team would like to thank Josh Taylor for giving up his time to coach the team during the tournament and Josh Taylor and Sante Giancola refereeing.