The Under 11’s put themselves in to a great position to win the league with four emphatic victories at their home tournament.

First up were Cottenham, who are one of our main rivals for the title. The Lynn youngsters brushed them aside with some excellent team work. Started slowly, making sure not to concede, the team gradually built up momentum and Ethan put us 2 – 0 up at half time. In the second half, Lynn stepped up a gear and with Joseph blocking everything that came towards him, the rest of the team passed the ball about well and piled on the pressure. Ethan then added two more, Ria put in a good shift with four goals and Josh Futter scored two more. A fantastic start to the day with a final score of 10 – 0. 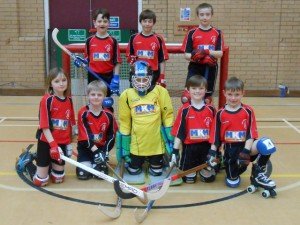 Next up were the youngsters of Cambridge. Lynn were cruising from the start, not giving their opponents any time on the ball and taking control quickly. Ethan (2), Josh and Ria putting Lynn 4 – 0 up by half time. The second half was again all one way traffic with all our players wanting a piece of the action. Relative newcomer Alfie, was only on for a few minutes before scoring two very well taken goals. Miles added another soon after and Keaton smashed in a brace and we were on a roll. Ria, Arthur, Ethan and Josh added more goals and the game ended 16 – 0.

The third game of the day was against Walpole, who proved to be tougher opposition. Lynn had to work hard to get the breakthrough, but once we did the team grew in confidence. At half time we were 5 – 1 up. In the 2nd half we played the ball about well, not giving Walpole the chance to get back into the game. Ethan knocked in two more goals to give us a comfortable 7 – 2 victory.

Our last game was against Letchworth, who made it very difficult for us to breakthrough their defence. However, we kept passing and moving and managed to create a few chances. Eventually Ethan found a way through, and after scoring our first goal of the game, he quickly added another three, thanks to some excellent teamwork from the other players. After half time we sat back and defended well, limiting Letchworth to very few chances. A very confident display saw us run out 5 – 1 winners.

With 38 Goals for and only 3 conceded on the day this was an excellent set of results all round and with some comfortable games it gave a chance for the younger members of the team to get some playing time. All of which showed great effort and determination.

Thanks to the whole team who were outstanding on the day. Also a big thanks to MKM Building Supplies Ltd for their continued support.