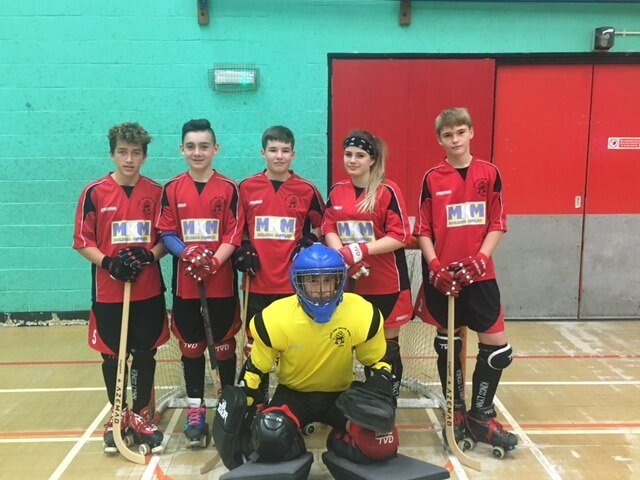 Kings Lynn’s second ECRHA under 17  tournament was at Bushfields Sports Centre.  The team were up against Peterborough B, Peterborough A & Soham.

The whole team played well on an unusually warm October day showing great determination and grit. They were well lead by their captain Harvey Dugdale with Lynn’s goalkeeper Josh Roberts having an outstanding performance in the last two games to help the team secure their two wins.

First game against Soham was a tough and physical match from the start. Soham took control of the game and with some quick goals were able to keep Kings Lynn on the back foot.  However Kings Lynn tried everything to break down the Soham defence but to no joy. Kings Lynn’s only goal came from a classic short passing movement followed up by a good shot from Joseph Hawes.

The second game against Peterborough B was as a great game form the start with both teams attacking and defending with great skill. Kings Lynn showed true passion after their first game to score three great goals from Finley and Ethan. With some close calls and great saves, Kings Lynn came away with a win.

The final match against Peterborough A was another entertaining game with both teams playing well and giving it their all to win it. However Kings Lynn were high on confidence from their last match and were able to take control of the game. With some amazing passing and defending, Kings Lynn scored three goals from Finley and Harvey. Josh Roberts was on form in goal with a great penalty save as well in saving the long shots from Peterborough players.

The team on the day