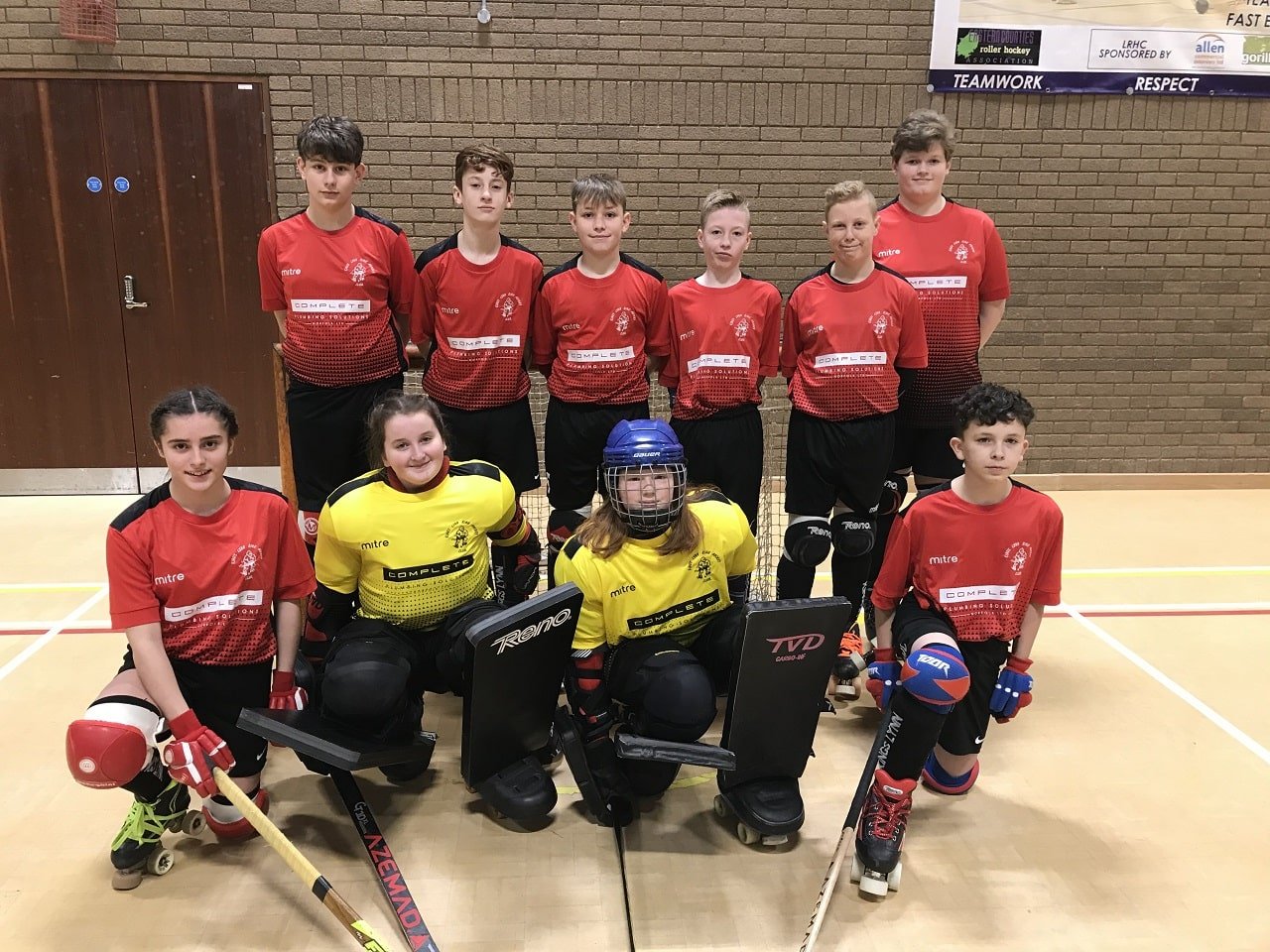 First game against Letchworth Whites started well with King’s Lynn players firing continuous shots at the Letchworth goalie who remained strong in the goal. King’s Lynn continued to play well with Alfie Poppy and Taylor Mcaree continuously trying to find the back of the net but didn’t manage too. Fantastic teamwork finally saw the first goal from William Dickerson who skated up from the defence with only four minutes of the first half left.  This was quickly followed by the second goal scored by Alfie Poppy.  In the second half the team showed good team work shared between Alfie Poppy, Taylor McAree and Harvey Blyler up front and William Dickerson, Alex Holford and Billy Davey making a strong defence. Kings Lynn unfortunately didn’t find the back of the net again in the second half. Both Goalies Imogen Senter and Lacey Vincent remained strong not allowing Letchworth W to score.

The second game was against Cottenham and Cambridge 1 (CCRHC1). King’s Lynn continued there strong team work during the second game. Will Dickerson and Billy Davey played a strong defence. Alfie Poppy and Harvey Blyler played strong at the front. Even though they played well as a team and Imogen Senter in the first half made plenty of saves the score at half time was CCRHC1 4 – 0 Kings Lynn.

Second half saw Alfie Poppy and Taylor Mcaree strong up front with Alfie Poppy scoring king’s Lynn a goal. Kings Lynn still worked hard and Lacey Vincent in goal making plenty of saves. Mikey Whitling and Alex Holford rotated their role in defence with William Dickerson they battled well in but  sneakily  CCRHC1 managed to find back of the net 2 more times.

Third Game was against Cottenham and Cambridge 2 (CCRHC2). Kings Lynn were energetic to play CCRHC 2. William Dickerson and Alex Holford played a strong defence while Taylor McAree and Alfie Poppy worked well skating up to the front resulting in Alfie Poppy scoring the 1st goal of the game. This was quickly followed by Alfie scoring the second. Alfie Poppy and Taylor McAree worked strong together passing the ball across goal which saw Taylor McAree score the third goal. With just a few seconds left of the first half William Dickerson and Billy Davey skated up from the defence and with Billy Davey passing the ball to William this saw William Dickerson scoring the fourth goal of the first half. Imogen Senter in goal for first half had many shots fired at her but was able to stop CCRHC2 finding the back of the net. Half time score Kings Lynn 4 -0 CCRHC2.

In the second half we saw Poppy Cooper and William Dickerson playing a strong defence. This was then rotated between them, Mikey Whitling, Billy Davey and Alex Holford.

The game continued with the King’s Lynn team playing strong in defence but CCRHC 2 managed to score a sneaky goal past Lacey Vincent who had made many saves throughout. Up front was rotated between Alfie Poppy, Taylor Mcaree and Harvey Blyler. Working well together saw Taylor McAree score the fifth goal with a minute left till the end of the game.

King’s Lynn u15’s would like to thank Thomas Barker for coaching.