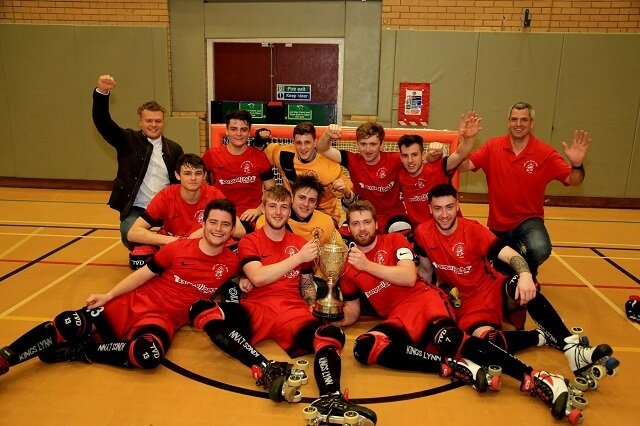 King’s Lynn Roller Hockey Club cemented their third Premier League title in as many seasons as they defeated a stubborn Middlesbrough outfit at Lynnsport on Saturday.

Knowing that just one point would see them triumph with two games to spare, Lynn flew out of the blocks, attacking Boro with a high press and some fast off the ball movement. The game soon slowed, however, as Boro found a way into the match, moving the ball with pace and maintaining an even share of possession.

Despite the challenge Boro presented, Lynn had the better chances in the first half, forcing some routine saves and finding space in the Boro area, and midway through the first half, Boro’s defence finally relented. Carter, who’s found his best form in Lynn colours this season, received a pass from the flank before pushing into the area and driving a firm flick into the top left hand corner of the net.

Boro retaliated strongly, controlling the tempo as Lynn demonstrated why they’ve the best defensive record in the league; but before long, Lynn had found another, this time with Griffin launching a slapshot from the halfway line that deflected off Baker’s stick and flew past the wrong-footed keeper.

Lynn have had some problems with two-goal leads in the past, not least away at Boro earlier in the season, and so entered the half-time break knowing that complacency would be costly. As the second half commenced, Lynn continued to play offensive hockey, but despite forcing some excellent saves from the opposing keeper, it was Boro who had the better chances to change the match.

First, a tenth team foul led to a direct free hit, taken by Smith; approaching Allander in the Lynn net, Smith faked right before flicking the ball onto the left-hand post and out of danger, to the palpable relief of the roaring Lynn support. Then, a challenge in the Lynn box led to a Boro penalty, this time taken by Stewart, which was confidently saved by Allander’s stacked pads.

With the game still in the balance, Lynn were able to put it out of reach midway through the second half as Baker’s clinical effort found the back of the net; and despite being only minutes away from claiming a triple crown, Lynn saw out the match in professional style.

As the final whistle approached, Lynn’s home support became increasingly thunderous; the sounds of drums and horns reverberated around the rink, creating a truly imposing atmosphere, and one totally befitting of this dominant Lynn team. As the whistle blew, celebrations ensued on and off the rink, with the players fully basking in another well earned title. 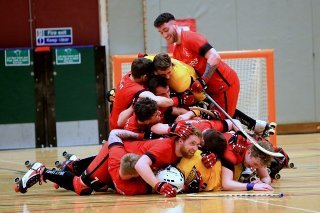 Lynn now have two league games remaining:
Away at Soham and at home to Herne Bay United

And as coach Baker said after the match, their priority now is to maintain their impressive defensive record, and look to add the National Cup to their league success. Lynn will certainly be eager to do just that, and despite the elation of winning a third Premier League trophy in three consecutive seasons, their campaign is not over yet.