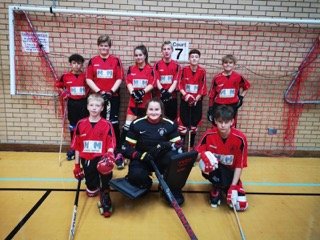 Second tournament of the season was held at Lynnsport, with ECU being the guest team.

During the second half, Mikey Whiting, Myah Easter and William Dickerson worked well together to maintain the power over the ball. Myah Easter, William Dickerson and Thomas Barker made several attempts at scoring. A tremendous goal was scored by Thomas Barker. Within a few minutes of each other, Alfie Poppy scored two fantastic goals. Taylor McAree and Myah Easter put up a great defence. A further two goals were claimed by Alfie Poppy and Harvey Blyler. Billy battled hard to prevent Letchworth from scoring. KLRHC witnessed Imogen Senter making an incredible save in the final minutes, along with Mikey Whiting composing several, remarkable passes to Taylor McAree.

Excellent team play was continued into the second game against CCRHC B. William Dickerson almost scored in the first few seconds, into the game. Myah Easter scored two goals, within the first few minutes. Great defending was seen by William Dickerson and Billy Davey. CCRHC B made serval attempts to score, however was unable to break through Imogen Senter in goal. In the final minutes Alfie Poppy showed great determination, taking control of the ball and scoring.

During the second half, CCRHC B made a creaking shot at scoring, however Imogen Senter tremendously saved. Harvey Blyler, Taylor McAree and Alfie Poppy worked well together to maintain the ball, with Alfie taking several shots at scoring. Mikey Whiting showed great strength in defending and presenting great passes to Alfie Poppy and Thomas Barker. Excellent team work continued throughout the game allowing Alfie Poppy to obtain a further two goals.

The third and final game was against ECU Guests. It proved to be a difficult game. In the very beginning, ECU presented several shots at the goal, however Imogen Senter remained strong, preventing them from scoring on many occasions. Although the game was challenging KLRHC never showed to give up.

Fantastic defence was visible by the whole team, particularly by Thomas Barker and Myah Easter. This was noticed when ECU took a remarkable shot, however Thomas Barker managed to block their aim. Tremendous resistance was also employed by Billy Davey and Taylor McAree. Imogen Senter worked tremendously hard and made several incredible saves. Unfortunately, ECU proved to be the stronger team winning the game.

Would like to thank Harvey Dugdale, Josh Roberts and Josh Taylor for giving up their time to coach the team during the tournament and Josh Taylor and Smokey for refereeing.