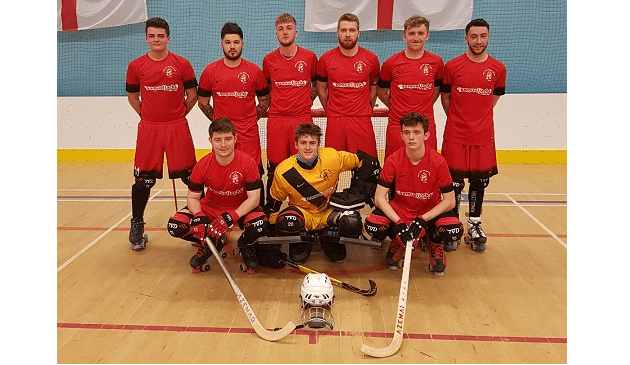 Lynn March On With Dominant Victory In Herne Bay

King’s Lynn Roller Hockey Club recorded another triumphant victory in the Premier League with a comfortable performance against Herne Bay United. Lynn added to the misery of a United side who are struggling with their early season form. Only a handful of players remain in the side that used to terrorize both English and European defences alike.

In the early stages United looked on course for victory with two individual efforts that threatened to offer a repeat of Lynn’s woeful performance in the National Cup last season.

The first goal came from a position in which the Lynn defenders must hold their heads in shame. Cutting in from the flank and turning his marker, Barker shrugged off another before stomping into the area to place a low finish past Lynn’s oncoming keeper. Allander’s made an excellent start to his Lynn career, conceding an average of just 2.5 goals per game, but could do nothing about Barker’s second, which came from a rebound that fell serendipitously for a simple finish.

Lynn, though, were unfazed by their early concessions, and with Allander saving not one, but two, penalties in the first half, they lay the foundation for a formidable resurgence. Tucker, grabbing the game by the scruff of its neck, made an incisive sprint through the middle of the rink, outpacing his marker to power an accurate flick beyond the United keeper. The half time whistle saw Lynn go into the break with the upper hand despite being a goal down.

This showed after the restart, as Carter continued his recent streak to finish off a training ground Lynn attack. Proving to be in the right place at the right time, Carter took the game out of United’s reach with another three goals in quick succession to add to the three he claimed against Soham the week before. A further effort from Tucker and a far-post finish by the mercurial Griffin sealed the spoils for Lynn, although United were able to add a consolation in the closing seconds.

Lynn dominated the second half, with the combination of Carter, Tucker, Baker, and Griffin proving particularly effective, and deserved their margin of victory.

Next up sees Lynn head to Manchester to take on the side they played on the opening day in the repeat fixture.

Lynn will be looking to continue their dominance in the league fixtures as they push on into the second half of the season.

Man of the Match: Jack Tucker

Thanks also to those who turned out in numbers to support the side on the evening.