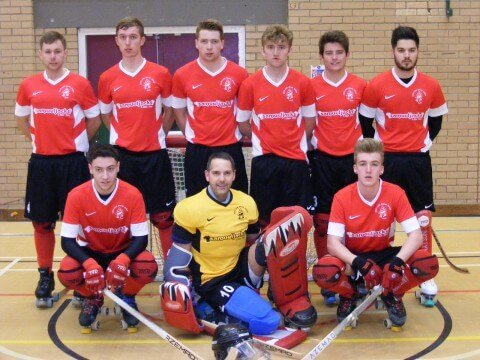 Lynn Premier league team continue their good start in the third game of the season against RHC Invicta.

Lynn knew coming into this game that it would be very physical and they would have to be patient in their play.
The game started well for the home side, with the opening goal coming within the first minute of the game, a swift exchange played by Barnes resulted in the move finishing with a hard slap shot to the roof of the net.

A few minutes passed following the goal and it was already very physical. As a result of this, the first blue card of the day was shown for a poorly timed tackle by the away side.

The direct free hit was unfortunately not converted so the home team now had a 4 on 3 power play for 2 minutes. After a minute of patient play the goal came. A slick pass from Kay to the far post was coolly finished to give Lynn a 2 – 0 lead and a second goal in quick succession for Taylor.

As the game went on the scoreline didn’t change dramatically however a couple of goals were added, one of these coming from Sergio Hutson to bag his first goal since returning to the club. One goal however was conceded from a piece of poor defending which allowed an easy shot to be taken and a goal being the punishment. The game remained this way until half time with the score 4-1 to Lynn.
The second half began with King’s Lynn sensing they had some control in the game and were hungry for more goals. With some good passing moves to break down a tight box defence system played by the away side, goals were soon added by Griffin and Gay to see the score keep adding up, while Didcock in Lynn’s goal saved a Direct free hit. Following the goals, Lynn found themselves in a stage of the game where many fouls were conceded. This resulted in a different free hit given for the accumulation of 10 and a goal was converted. A late flurry of counter attack goals added by Lynn saw the game play out in a satisfying 14 – 4 win for the home side.

Lynn’s impressive start continued and their next test is away to Manchester RHC on the 6th December, who have recently rejoined the league and started well.

Come along and show your support.

The premier league team would like to thank their sponsors – Samuelljacks and Carter Engineering Supplies and all that helped on the day.