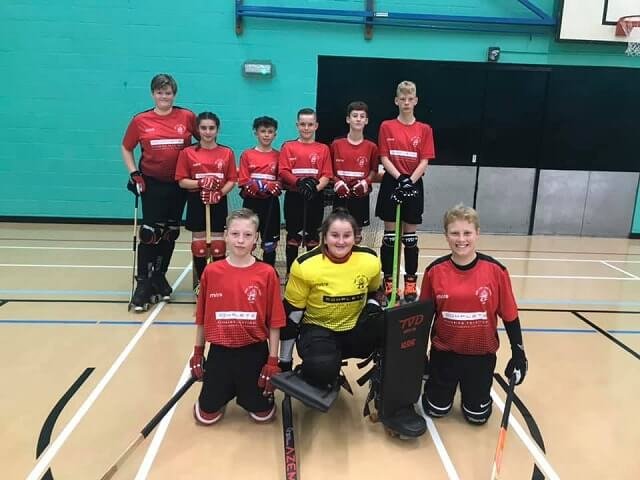 Kings Lynn’s second under 15’s tournament of the season was at Bushfields Sports Centre Peterborough.  The team were up against Cambridge and Cottenham Rink Hockey Club 2 (CCRHC2), ECU Gold and Peterborough.

First game against CCRH2 started very well for King’s Lynn with a good spell of passion. Will Dickerson scored the first goal early into the game. King’s Lynn continued to play well as a team which lead to Alfie Poppy scoring a hattrick. Fantastic team work then saw Will Dickerson finding the back of the net again. Growing in confidence Alfie Poppy played well in defence as well as skating up to front to help which saw Alfie score another 2 goals. Kings Lynn carried on working well as a team with Harvey Blyler, Billy Davey, Taylor Mcaree all taking shots at CCRHC goalie right up to the last few seconds of the first half. Half time 7-0.

Second half saw Alfie Poppy come out strong with Alfie scoring another goal. CCRHC2 put on the pressure at this point scoring a sneaky goal. Poppy Cooper, Alex Holford continued playing defence CCRHC2 made many shots but goal keeper Imogen Senter was on full guard and not letting them score.

The second game was against ECU Gold. King’s Lynn continued their strong team work during the second game as they did in the first game. Alfie Poppy and Harvey Blyler played strong at the front, with Taylor Mcaree playing a strong in defence  but skating up to the front to pass too Alfie and Harvey. This saw Alfie Poppy scoring another hattrick in the first half to see the team leading 3-0

Second half King’s Lynn still working hard as a team ECU Gold battled well and tried scoring plenty of times but were unable to get pass defence of Poppy Cooper and Alex Holford also with Imogen Senter making some fantastic saves. ECU Gold sneakily managed to find back of the net. With the defence  Will Dickerson and Kieren Baker passing up to Alfie Poppy, Alfie scored another goal. In the last second of the game with the defence down ECU Gold managed to pop in a goal.