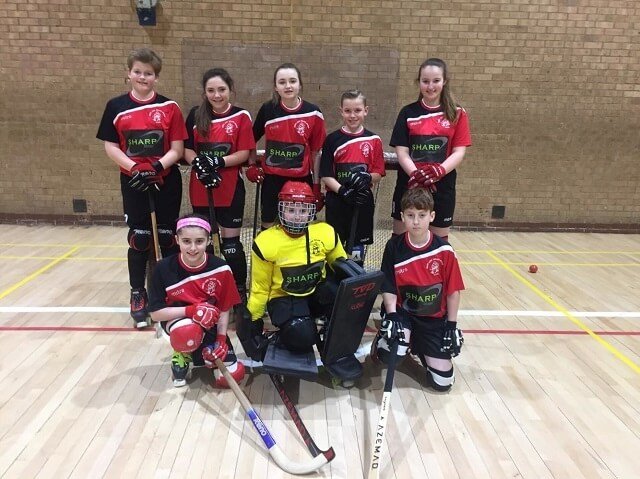 Kings Lynn’s second ECRHA under 13s tournament of the season was at Ross Peers Sports Centre.  The team were up against ECU Gold, Letchworth, and King’s Lynn B.

First game against ECU Gold started very slowly for King’s Lynn. With a good spell of passion they finally got a goal from Alfie Poppy. King’s Lynn started to play well which lead to the second scored by Ria Griffin with nineteen seconds left of the first half. Growing in confidence they added a 3rd also scored by Ria Griffin with only five seconds of the first half left. Half time 3 – 0. Second half saw ECU Gold come out stronger but with some good play by King’s Lynn they added a 4th  goal by Alfie Poppy.

The second game was against Letchworth. King’s Lynn never got started and they found themselves 1 – 0 down within a minute into the game. Letchworth then added more goals. Half time 10 – 0. Second half King’s Lynn tried to get back in the game which left them open at the back which Letchworth took advantage of scoring two more quick goals. Letchworth put King’s Lynn under pressure again and again. Goalkeeper Imogen Senter (GK) played well and saved many goals throughout the game.

Third Game was against King’s Lynn B. With a poor display against Letchworth and after having a discussion about their previous performance against Letchworth with their coach Josh Taylor, King’s Lynn A was determined to get back to winning ways. Within three minutes into the game Alfie Poppy put King’s Lynn A 1 – 0 up. Three seconds later Ria Griffin added the 2nd. King’s Lynn B didn’t make it easy for the A team, they made them work hard. Billy Davey adding the third to make it 3 – 0 at half time.

Second half King’s Lynn A started well scoring by Ria Griffin. With the A team putting pressure on the B Team, Alfie Poppy scored another for the A Team to take the score to 5 – 0. The A team then became complacent leaving no defence, of which the B Team took advantage and scored. King’s Lynn A started to play well again as a team scoring their 6th goal, finished by William Dickerson. With only a minute left Ria Griffin scored the 7th goal. A great performance from both teams.

We would also like to thank Josh Taylor for coaching.

Plus a thank you goes to Sharp Laser for their generous sponsorship to buy the team new kits.