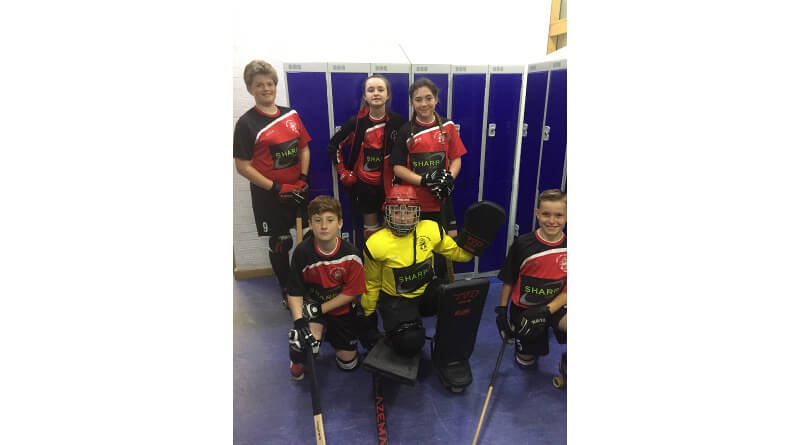 Kings Lynn’s Fourth ECRHA under 13s tournament of the season was at Cambridge Regional College.  The team were up against Cottenham, ECU Blue & Skaters.

First game was against ECU Blue. King’s Lynn A knew it was going to be a tough game but started the game strongly putting pressure on ECU, but just couldn’t find the back of the net. With both teams playing an attacking game, King’s Lynn opened the scoring with three minutes to go in the first half through Alfie Poppy. With ECU putting King’s Lynn under pressure in the last few minutes of the first half King’s Lynn defence stayed strong.

Second half was the same attack after attack from both teams. With two minutes left, ECU found the back of the net leaving an exciting finale to the game. King’s Lynn came out on top with thirty seconds to go, Ria Griffin scoring the winner

The second game was against Skaters. With Kings Lynn still buzzing from the first game, they put Skaters under all sorts of pressure. With Ria Griffin scoring the first goal and thirty seconds later Alfie Poppy made it 2 – 0. With some good team play Will Dickerson scored as well. With King’s Lynn dominating the first half score was 6 – 0.

Second half saw much of the same with Alfie Poppy adding two more. With  some great play Millie Watson and Billie Davey found the back of the net score 10 – 1. Will Dickerson added another. King’s Lynn took there foot off the gas, which allowed Skaters to score a consolation goal. A great performance from King’s Lynn

Third Game was against unbeaten Cottenham . King’s Lynn started well putting pressure on Cottenham. With both teams playing an attacking game it was end-to-end and King’s Lynn defence was playing solidly. Cottenham piled on the pressure and finally got a goal with nine minutes left of the first half. With in form King’s Lynn goalkeeper Imogen Senter determined not to let Cottenham have their own way, pulled off some great saves, which gave confidence to her team.

Second half started with the same attack after attack from both teams with Cottenham again scoring with nine minutes to go. King’s Lynn weren’t giving up and which paid off with a great goal from Alfie Poppy making 1 – 2 With King’s Lynn looking to add another. Cottenham piled the pressure on to the King’s Lynn defence, which lead to two decisions not going King Lynn’s way and leading Cottenham to score two further goals. With four minutes left Cottenham added a fifth goal. King’s Lynn still weren’t going to give up and put Cottenham under pressure with some great play between Alfie Poppy and Ria Griffin endding in a goal scored by Ria Griffin.

Thanks goes to Sharp Laser for their generous sponsorship of the team.