The King’s Lynn Roller hockey U11’s team had an away tournament at Sudbury on Sunday 20th December. The team set out with three team members making their debut in the U11’s league: 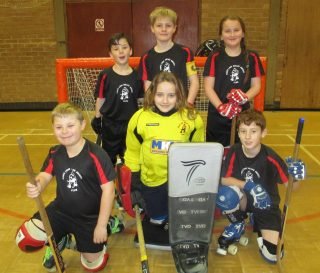 Their first game was against Herne Bay. The KLRHC U11s team fought hard as they tried to find their places within the team and on the rink for the first time. Miles Hovell and Ryan Hulcoop the more experienced players, provided the two goals scored and Leena Futter worked hard in goal, but the Herne Bay team were very strong and Herne Bay eventually finished as 10 – 2 winners.

The second game of the day was against Letchworth which was another loss for King’s Lynn. This was a friendly match as Letchworth had an over age goalkeeper, so Lynn actually collect the points.  The KLRHC U11’s team started to gel together a little with Aaron Grant and Imogen Senter providing excellent teamwork in defence. Miles Hovell scored the team’s only goal in this match as we lost 4 – 1.

The third match of the day was played against the Ely B team and was also another friendly giving King’s Lynn the points. After giving King’s Lynn an easy start in the match, Ely found their rhythm.  As this was another friendly, the more experienced  KLRHC players were given a rest and the younger ones were taking on Ely with Imogen Senter and William Dickerson playing both as attacker and falling to defend when needed. Aaron Grant scored his debut goal in this game and Miles Hovell scored the other goal for King’s Lynn as we went down 5 – 2.

The last game of the day was against Peterborough, who played with one less player as their goalie was taken ill and another player had take his place. King’s Lynn lost a very close game 6 – 7, but it was close to a tie. The whole team played hard and fought till the last second in what was a very fast game. William Dickerson was superb playing both defence excellently and assisting with attacks in his debut tournament for U11’s. Miles Hovell and Ryan Hulcoop each scored three goals in this game.

Though the team lost all their games on the day, they never gave up. The U11’s have many new players this year and they are all still finding their places within the team. So, well done team and let’s keep working together.