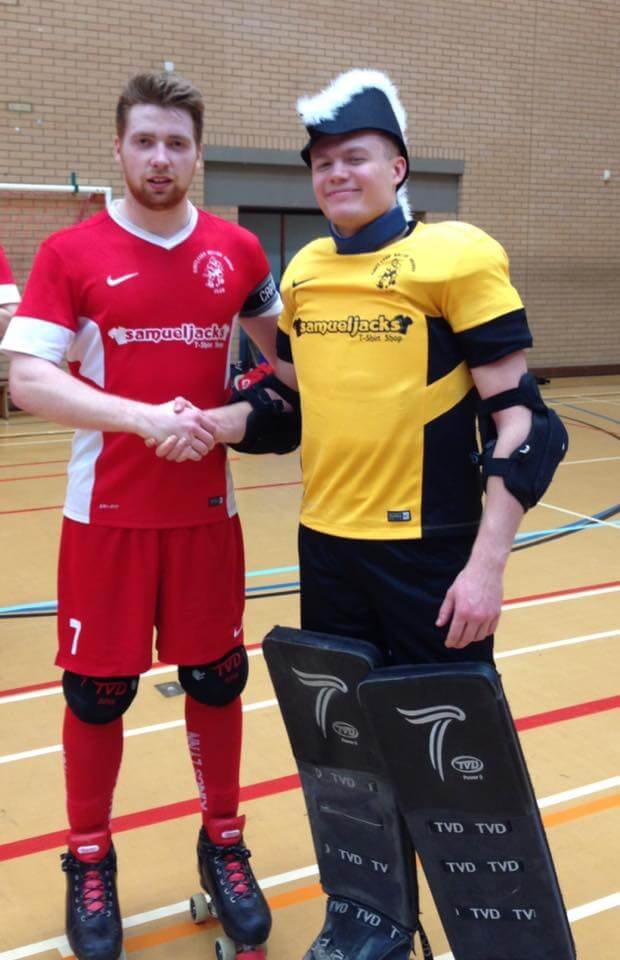 King’s Lynn welcomed Grimsby to Alive Lynnsport on Saturday 14th May for the second leg of the NRHA National Cup semi-final, with the hosts having to overturn a two goal deficit an exciting game was to follow. 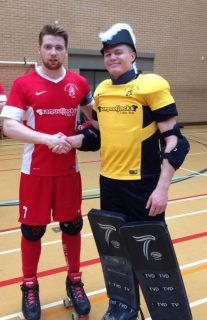 The game started slow with Grimsby knowing all they had to do was defend well and keep the score down to see themselves progress. Despite many chances being created at either end no side could break the deadlock until late on in the first half of play. It was the home side on the score sheet first with Josh Taylor finding the net from a counter attack. Grimsby hit back no more than two minutes later and the score remained 1 – 1 going into the break.

Into the second half and Lynn now needed to put more pressure on the travelling side to give themselves any chance of keeping the tie alive. Unfortunately Grimsby were the team to add to the score line not only once but twice in a short period of time.

With the score now 1 – 3 our home side regrouped and reacted quickly with a smart move leading to Matt Baker finding the net. Once again through a piece of slack defending, Grimsby soon regained their two goal lead. After a brief stoppage in play due to an injury King’s Lynn came out fighting and giving everything they had. Two quick fire goals coming from Josh Taylor brought the game on the day to level pegging and restored the tie to within two goals. Lynn with the added desire now to pull off a spectacular result added their 5th of the game through Michael Carter. A clever turn and shot caught the keeper off guard and gave them the lead in the game once again. Grimsby soon had an opportunity from a direct free hit however Will Martin stepped up his game to deny at a crucial moment in the tie. With only three minutes on the clock and the tie looking as if it was slipping away Lynn they found yet some more energy and got a 6th goal of the game. This time Jack Tucker finding the net from a clinical move.

The tie over two legs was now level and Lynn felt they could press on for what would be a memorable victory. With only 13 seconds left on the clock it wasn’t to be. Grimsby clearing the ball high in the air from one end to the other found their own player waiting to take the ball from the air and finish into the net. A controversial moment in the game which proved pivotal in the tie.

Overall a disappointing result for Kings Lynn who miss out on the National Cup Final by the smallest of margins. A very good result in terms of winning the game however it just wasn’t enough to seal the tie.

Captain Vancouver Man of the Match: Will Martin (GK) (Pictured)

Thanks to the timekeepers and all those who were present at the game to support us and for pushing the side to the end.

Many thanks to our sponsors SamuelJacks T-Shirt Shop and Carter Engineering Supplies for the ongoing support of the team.