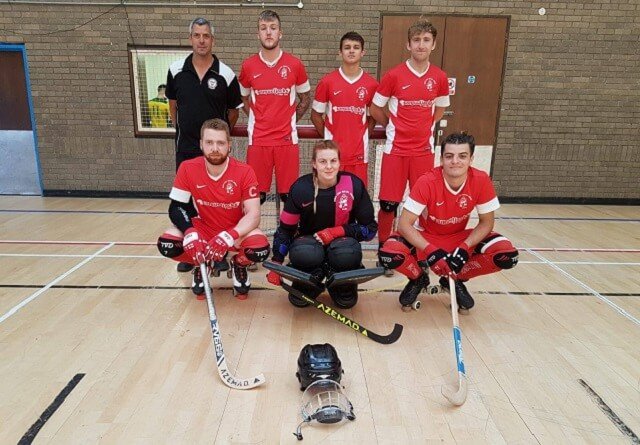 For Kings Lynn Senior A team, this last ECRHA tournament was a bit of a dead rubber as the title chase was out of their hands after two losses to Soham RHC. The team were certain to finish in second place and would have to rely on results elsewhere to make it interesting again.

The first match was against Soham and the team needed a win, if not just for pride, to maintain any sort of pressure. Things started badly as Soham took the lead after five minutes. It took a while for the goal to be confirmed and this was just an early insight into the refereeing issues that would spoil the match for both sides. Jamie soon pulled the team level again and with less than two minutes to go, Owen Norris put Lynn ahead at half time. Spirits were high.

Second half and things soon changed. Less than a minute and Soham were level and the sparks soon started to fly, not aided by the referees and their decision making.  Four minutes later Josh Taylor put Lynn ahead again, but soon after this he picked up a Blue Card for protesting too much about another poor decision. The team managed to hold out for the two minutes and kept Soham at bay to keep themselves ahead. Then with Soham reaching ten team fouls, Kings Lynn were offered the opportunity to increase their lead from the direct free hit. Up stepped Josh Taylor and whilst closing on the goalie, he lost control of the ball and the opportunity was lost.

With the referees clearly having lost control of the game there was still time for another highlight. With less than a minute on the clock, a scuffle in the corner led to Josh Taylor inexplicably being given another Blue Card. From the resulting play Scott Neville scored for Soham and the game finished as a draw.

The second match was against Norwich, who had only just lost out to a strong Peterborough side by a single goal in their previous match. However a different dis-jointed Norwich faced Kings Lynn and after the hard fought match against Soham, Kings lynn were able to relax a bit and the goals flowed easily

The second half saw Lynn take their foot off the gas and even allowed Norwich a consolation goal. The highlight of the half saw Kasia save a penalty to maintain her 100% record for the season.

Next up were Ely & Chesterton United. A fast paced affair with Lynn opening the scoring after three minutes and scoring regularly without reply. This all changed when they allowed ECU’s only threat,  Max Dunand, space and he pulled two goals back before half time.

The second half saw much of the same with Lynn scoring freely until ECU were awarded a penalty. Kasia stood up to the situation once again and Max was thwarted even saving the rebound before eventually scoring at the third attempt.

Last match of the season for the team and they faced Peterborough who had been re-juvenated in the second half of the season. Kings Lynn applied early pressure and were rewarded after Josh Taylor opened the scoring after nearly four minutes. This then paved the way for Lynn to take control of the game, easing into a comfortable half time lead.

The second half saw Peterborough defend stubbornly until this time Jack breached the defence with a lovely individual goal. Peterborough hit back straight away, until they fell away under the constant pressure from the Lynn team. With Lynn scoring five further goals to totally control the game, Peterborough managed to score a consolation right at the end of the match.

Runners Up in the league, the team head off to the ECRHA Cup Finals next week hoping to beat Soham in the Senior KO Cup Final