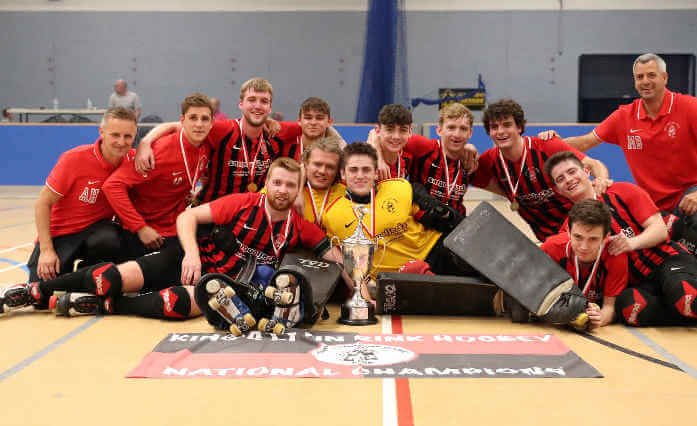 The National Cup had eluded Lynn in each of the previous two seasons. In the semi finals, two years ago, Lynn were knocked out to Grimsby under contentious circumstances, losing 6 – 5 on aggregate to a goal scored from a high stick; then, last year, Lynn relinquished a 3 – 1 lead to Soham in the final to lose via penalty shoot-out. It was both with trepidation and urgency, then, that Lynn entered this game, desperate to win the only domestic trophy missing from the cabinet.

Lynn’s run to the final was relatively straightforward. They beat Ely and Colchester United 6-1 in the quarter-final, before hammering Peterborough 23 – 1 over two legs in the semis. In the league, Lynn lost to Grimsby away, 5 – 3, their only loss of the season and were unable to face them at home as Grimsby forfeited due to injury. Grimsby, on the other hand, defeated Lynn’s title rivals London in the quarter finals, and Premier League heavyweights Middlesbrough in the semis, which may, therefore, have given them greater confidence coming into the match.

With so much at stake, it’s unsurprising that the game started off as a cagey affair. Both sides battled for possession, creating the occasional, but ultimately harmless, chance, as each progressively found their feet in the first half. As the game heated up, Lynn’s first half keeper, Will Martin, had some strong saves to make as Lynn defended tightly and broke on the counter. After a few close calls, Lynn’s opening goal arrived from some stunning individual skill, Jamie Griffin collecting the ball from outside his own area before surging forward, lifting the ball over the defender and half-volleying the ball past veteran keeper Eddy Revill in Grimsby’s net.

Lynn might’ve used the momentum to probe further holes in Grimsby’s defence, but it was they who struck next, Nic Johnson sprinting round the outside to score an audacious one-handed flick at the near post.

It took this flamboyant reminder of Grimsby’s attacking threat to spark Lynn into life. Soon after, Lynn were awarded a penalty for a foul on Matt Baker, which captain Josh Taylor confidently converted, a hard slap straight down the middle. Taylor was involved again for Lynn’s third goal minutes later, as he dropped the ball at the near post to find Jack Tucker, who blasted the ball high into the top corner.

Lynn finished the half 3-1 up, and deservedly so given the balance of play.
After a routine keeper substitution, in which Tom Allander came on for Martin, Lynn began the second half as they ended the first, on the front foot and keen to put the game to bed. Within 5 minutes, Lynn were 4-1 up, Griffin again undertaking some ambitious skill to skate around the goal, lift the ball into the air and volley it into the net, the ball this time taking a fortunate deflection off Mark Waddingham’s skate to loop over a stranded Revill.

With a comfortable three goal margin, Lynn were able to defend in numbers, restricting Grimsby to the flanks. Occasionally they found pockets of space, but Lynn’s defence was tireless in extinguishing their attacking threat. Lynn put their bodies on the line to block virtually every shot Grimsby fired, and Allander in goal was a impermeable last line of defence as Grimsby failed to find a way back into the match.

At the final whistle, Lynn’s player’s were jubilant, celebrating with gusto their first — and probably not last — National Cup. It couldn’t be better reward for a team that have overcome all sorts of odds this season, from multiple serious injuries to two of Lynn’s three goalkeepers commuting from London each week to attend training, to win their fourth consecutive Premier League title and their first ever league and cup double. If it weren’t for the spirit of the side, much of which has been generated over more than a decade of playing together, this season may have toppled the undisputed champions. Nothing, however, proved sufficient to break Lynn’s heart, and they pulled through to complete their most successful season to date.

After the game, Lynn collected their league and cup medals and captain Taylor was awarded the distinguished accolade of Senior Player of the Year, a title few will dispute as he led his side to unprecedented success, scoring 50 goals in the process.

Six players from this side will now travel to Barcelona to represent England on the grandest stage, at the World Roller Games. Tom Allander, Josh Taylor, Josh Horn, Jack Tucker, Matt Baker, and Owen Norris will link up with former team mate, and last year’s National Senior Player of the Year, Michael Carter, alongside Grimsby’s Charlie Greenwood, Peterborough’s Ruben Allam (GK), and Alex Mount of Portuguese side Sanjoanense. With the majority of this new-look England side thoroughly red and black, the boys will hope they can transform Lynn’s domestic successes into those international.

King’s Lynn Players off to Uruguay