The Under 11’s wrapped up the league title with three more victories at the Cambridge home tournament.

The first match of the day was against Sudbury, who proved hard to break down and a with slight lapse in concentration, saw Lynn go 1 – 0 down early on. Eventually some good passing and team play sent Ethan through on goal who smashed the ball into the top corner. Within minutes Ethan once again found himself clear and he slotted the ball home for his second of the game and Lynn went into the half time break with a 2 – 1 lead. 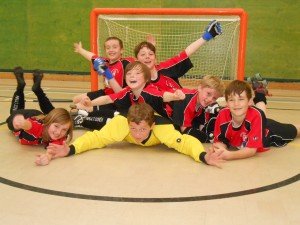 With the team passing and moving well, Lynn finally took a hold on the game and Ethan squeezed in another two goals to get us off to a great start and a final score of 4 – 1 in our favour.

The second match against Ely was more comfortable. We were 4 – 0 up at half time with all of the goals coming from our top scorer, Ethan. In the second half, our youngsters eased up and with Josh Futter adding one more goal, we finished up 5 – 1 winners.

The last match of the day was a bit of a goal fest against Cambridge. With the league title already wrapped up, we started with the younger members of the team. Ria and Josh helped themselves to a brace each and with another quick goal from Ethan within seconds of coming on put us 5 – 0 up at half time. In the second half Keaton snuck in a goal from nowhere when Ely’s goalie seemed to lose sight of the ball and then quickly helped himself to another with a great finish. A solid display from Arthur saw him on the score sheet with three well taken goals. One each from Miles and Ria gave Lynn a very convincing 12 – 0 win.

As always Joseph was excellent, only conceding 2 goals on the day.

Congratulations to the team, with 17 victories out of 18 games, only just missed out on the perfect season.

Well done to you all!!