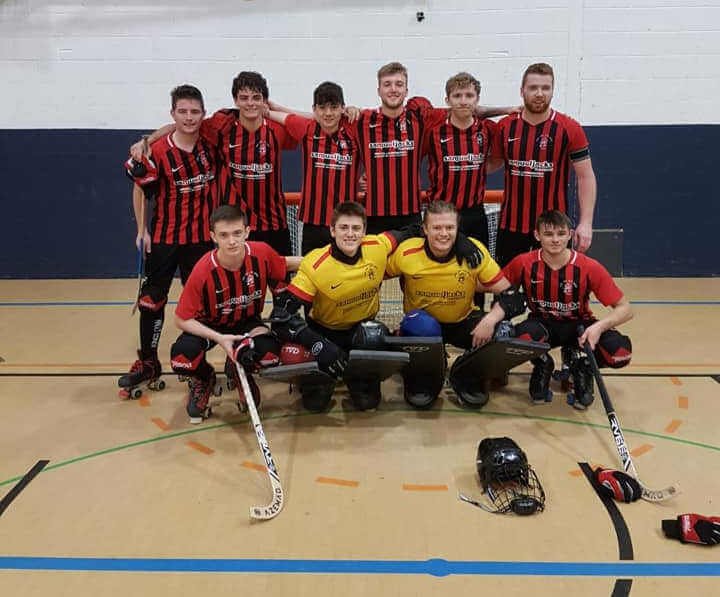 King’s Lynn Roller Hockey Club secured a hard fought victory at the weekend, beating their nearest title contenders, London RHC, by a one goal margin to reduce the distance to a fourth consecutive league trophy to just three points. Should Lynn win their next game at home to Grimsby on Saturday 25th May, they will become the first team to win four consecutive titles since Herne Bay United managed the honour 10 years ago. That may be easier said than done, however, as Lynn suffered their only defeat of the season away to Grimsby in January, a 5 – 3 loss that emphasises, despite Lynn’s recent dominance, how competitive the league can be, a fact that was only too apparent again on Saturday, as Lynn risked a second defeat, entering the break 3 – 2 down.

Lynn started the game at breakneck speed, scoring from their first attack as Taylor found space down the left to power a trademark slapshot high past the London keeper. He then doubled the lead soon after, scoring a deflection to put Lynn two ahead. Lynn’s command of the game began to weaken, however, as London found their rhythm, spending longer spells on the ball and finding space inside Lynn’s area. The first sign of a comeback came with some tricky play around the goal, London hooking the ball around the post only for the ball to be cleared off the line. Initially a goal was awarded, only for the decision to be overturned as the referees couldn’t agree that they’d both seen the ball cross the line. If luck wasn’t on London’s side this time, it certainly was a few minutes later, as a collision inside the area prevented Martin from reacting to the second phase of play, and virtually gifted London an open net. Lynn turned to the referees, expecting some kind of protection, only for no foul to be given on the keeper, and the goal to stand.

As much as Lynn tried to shrug off this setback, London continued to build momentum, and it wasn’t long until their compact build-up play paid off again. London, with bodies flooding the area, took a slap from distance, forcing Martin into a late reaction save that was unable to stop the ball from trickling over the line. This time there was no controversy, and Lynn only had themselves to blame for allowing London to dictate the game’s tempo. Unwilling to relinquish their control of the match, London soon scored another from a similar position. Martin, who didn’t seem to learn from the previous goal, failed to close the space between himself and the London striker, who again chanced a slap from distance that squirmed its way through the Lynn keeper.

Lynn were able to see the half out, ensuring that London were unable to take any further advantage, and came back out in the second half a rejuvenated side. They showed greater intent and focus, and pressed London more aggressively in search of the goals to turn the game in their favour. Lynn’s intensity was soon rewarded, as Norris found space at the near post to flick the ball past London’s keeper and tie the contest. Not long later, Lynn had regained control of the tie, as Barnes and Baker exchanged a one – two in the London area that Barnes deftly swept in at the near post. From this moment on, Lynn never looked like giving up their lead, and despite facing bouts of intense London pressure, Lynn continued to break on the counter to turn the contest into a thrillingly tense spectacle. One goal at either end could’ve decided the outcome of the entire league, and so it was with audible joy that Lynn persevered and managed to see their lead to the final whistle.

Only three points now separate Lynn from finishing another season in pole position, and with both legs of their National Cup semi-final this week, a historic league-cup double is within reach. Lynn’s next home game is this Saturday 18th May, against Peterborough in the National Cup semi-final second leg, at Lynnsport, before they face Grimsby a week later in a match that could settle the league.